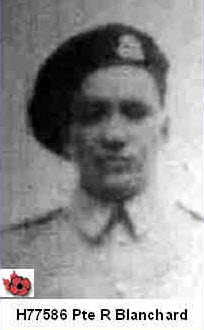 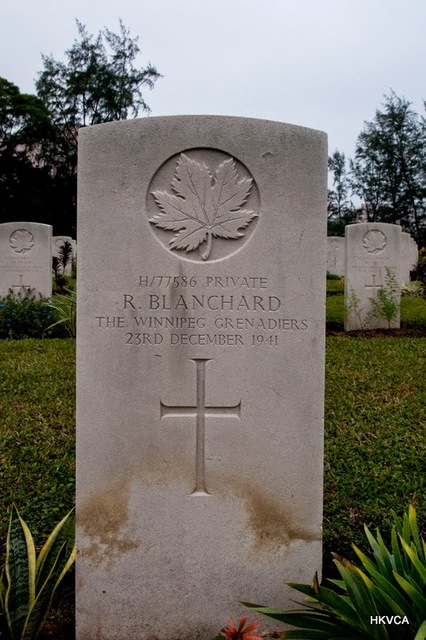 Sent to Pamela Heinrichs by Julie Carver May 2022

Thank you to the HKVCA for giving me the opportunity to tell my great uncleâs story. His name was Robert Blanchard and he was 27 years old when he was killed in action on December 23, 1941 during the Battle of Hong Kong. His mother was MÃ©tis (Red River) and Anishinaabe (Sagkeeng First Nation).

I didnât grow up around my Indigenous side but I undertook an extensive ancestry search in the summer of 2021 to confirm what I had been told, and that is when I found out about my great-uncleâs death in WWII. I was lucky to be able to access his 121-page military file, which gave me a lot of insight during that time of his life. His mother was unaware that he had left for Hong Kong until she received a letter from him on his way there. His death wasnât confirmed to her until a year after he had been killed, and his exact date of death was confirmed to her 4 years later. I felt a deep connection reading through his file, and I must admit that I was emotional thinking about him and his life. I canât even begin to imagine what that time was like for them, along with all the other soldiers and their families.

Iâve been on a reconnecting journey for the last couple of years by learning and practicing the traditional Indigenous ways of living. During that time, Iâve also been able to obtain my MÃ©tis citizenship as well as connect with newly found relatives from Sagkeeng First Nation.

It is important for me to honour my great-uncleâs legacy as an Indigenous veteran. Iâm on this amazing journey of reconnecting with my MÃ©tis and Anishinaabe roots thanks to him and all of my other Indigenous ancestors. I encourage everyone to learn more about Indigenous veterans and to do what they can to advance reconciliation in Canada.