The Battle for Hong Kong & the small part I played 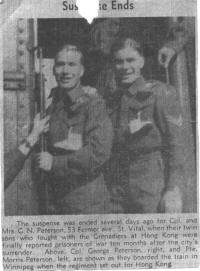 My story begins Oct 25th, 1941 when along with the other 914 officers & men of the Winnipeg Grenadiers we boarded a train in Winnipeg that would carry us to the west cost to Vancouver, BC. There we were joined by 100 officers (including two nursing sisters) and men attached to Brigade Headquarters, plus another Infantry regiment from Quebec, the Royal Rifles of Canada with their 962 officers and men for a total of 1977 Canadian volunteers who then became known as "C" Force. Commanded by a man who had recently been promoted up from the rank of Lt/Col to that of a Brigadier to lead our small brigade. This man was Brigadier J.K. Lawson, he was a career officer and a veteran of W. W. One, and was stationed in Ottawa.

One of the jobs Brigadier Lawson had performed in Ottawa part was the grading of all army units then stationed in Canada, class "A" were combat ready, "B" could be made combat ready with a little more training and "C" should be used for Garrison duty only. Both the W G’s and R R’s were placed in the latter category, was this the reason we were designated as "C" Force?

On our arrival at the west coast the majority of the members of "C" Force numbering about 1857 troops were ordered to board a ship that was moored to the dock in Vancouver, the HMNZS Awatea. The Awatea was a former New Zealand luxury liner plying her trade between her home port in New Zealand & Canada and had room for 377 1st class 150 tourist class and 38 3rd class passengers and her crew. Our officers were put up in state rooms but for the other ranks it was a different story, we were very cramped and slept in hammocks that were slung just about every where and even above our mess tables. The balance of "C" Force of approximately 120 officers & men of the R R’s were put on board the HMCS Prince Robert, our escort vessel.

Both vessels left Vancouver on the evening of Oct 27th and our voyage had begun. We made one stop in Hawaii to take on fresh food supplies as the refrigeration system on the Awatea had broken down and after these supplies were loaded on board we carried on with our journey, arriving in the British Colony of Hong Kong the morning of Nov 16th. The Colony was in two parts the Island of Hong Kong itself & What was known as the New Colony was in two parts the Island of Hog Kong itself & what was known as the New Territories on the mainland called Kowloon. On docking at the mainland side we were marched to our barracks named Sham Shui Po & took up residence. We were greeted very heartily by the people of the colony & any one talking about war being imminent with the Japanese Empire were responded to with it will never happen they wouldn’t dare attack the British Empire. How wrong they were.

I was a Cpl in charge of a section of 13 platoon in "D" company in the Grenadiers when we landed in Hong Kong & around the end of Nov received orders to report to the Command Gymnasium on the Island, to take part in a physical training course, to re-qualify as a PT instructor. Thus, this is where I was on the morning of Dec 8th when the Japanese attacked Hong Kong by bombing various targets on the mainland such as Kai Tak airport where our small obsolete antique air force was immediately destroyed while still on the ground. They also bombed some oil storage tanks & dropped a few bombs on our barracks of Sham Shui Po & did some damage to the naval docks on the island.

During this air raid all personnel taking the PT course were ordered to pack our gear & report back to our respective units for further orders. My company was on the island at a place called Wong Nei Chong Gap, this was also where our Brigadier Lawson had set up Canadian Brigade Head Quarters which was now known as West Brigade with him in charge. The Canadian units had been separated with the Royal Rifles being placed in East Brigade under the command of a British Brigadier. I have often wondered just how much longer we could have fought the Japanese with all Canadians fighting under Canadian command. The reason my asking this question is after our capitulation, we were told by more than one Japanese officer that they would rather fight against any other unit than to go up against the Canadians.

On reporting in to my company commander at Won Nei Chong Gap I again took over command of my section and got settled in, only to be ordered a few days later to turn command of my section over to Cpl Charlie Smith and pack up again to report to an area of what I think was Wan Chai Gap to become a member of a newly formed reinforcement company. Charlie was killed at Wong Nei Chong when the Japanese landed onthe island & attacked the Gap, thus splitting our defence lines in two. At Wan Chai I was put in charge of a group ofmen and our job was the guarding of a big supply dump of mostly fuel & ammunition. The Gap was quite often shelled by the enemy fire from the mainland & we could hear the shells coming in, luckily for us the only round that landed in the dump proved to be a dud.

At times we were also taken to different parts of the island to try to stem the advance of the enemy. One of these times I remember we were in an area above Wong Nei Chong Gap in an attempt to try to retake the Gap but were repulsed & once more were forced to fall back. It was during this time I received an order from a British officer to take a group of men up to a Police station that overlooked a cross roads (Wan Chair?) & to guard the area at all costs, while the others fell back. I remember I was scared as were my men but an order is an order. Just before we were to proceed Maj. Hook "D" company commander arrived on the scene & asked what we were doing & when informed of my orders, his first words to me were "Bullshit if one falls back we all fall back" We did not need any further encouragement & retreated with the rest. We ended up in one of the mansions on what was known as the Peak & we wereable to obtain a meal & later a good nights sleep, the first in what had seemed to be a very long time.

On another of these forays that this time proved to be false we were taken to a Pill Box on the waterfront that was armed with a Vickers machine gun & the crew had fired at what they believed was an enemy ship attempting to land on the island, with the result being the destruction of one of our own ammunition boats manned by the members of the Royal Navy. This was another mistake caused by the lack of proper communication which occurred all too frequently in the battle for Hong Kong.

The last skirmish I was involved in occurred Christmas Eve on Bennet’s Hill which was more of a ridge than a hill in front of Aberdeen water reservoir, we were dug in pretty well & had been saving some food for a good Christmas dinner which we were all looking forward to when the Japanese decided to attack. After much bloodshed, yelling & screaming we were forced to withdraw again, our plan if forced to retreat was to open up on the area we were vacating with three Vickers machine guns placed in position on the other side of the reservoir. Our Christmas dinner was lost to the enemy but he was made to pay a very high cost for same. The next day orders to lay down our arms & surrender to the Japanese arrived & the war for us was over, & our fight for survival over the next almost 4 years had begun.

Other of the my experiences in the battle for Hong Kong and the aftermath of being in enemy hands I have tried my best to forget, some memories to no avail. I have never related these to any other person, nor will I ever, every once in awhile I experience a nightmare & all the memories return.